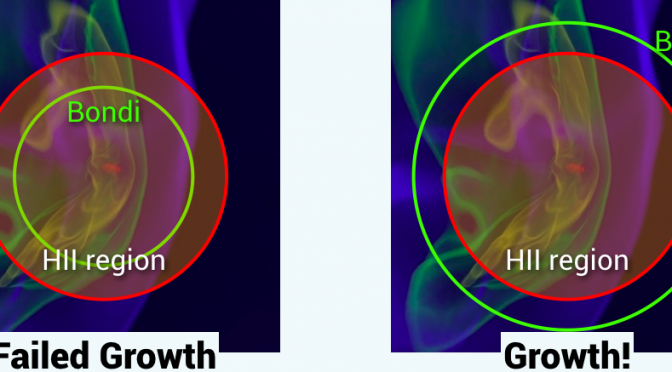 In the past month, we have submitted two papers on the subject of massive black hole formation and growth. The first was led by John Regan at Durham University, and the second was led by KwangHo Park here at the CRA.

In Regan et al. (arXiv), we investigate the process of massive black hole formation in the vicinity of a strong radiation source. One plausible scenario involves a close dark matter halo pair, where one forms a galaxy and the other’s star formation is suppressed by its partner’s radiation. Here we used a radiation hydrodynamic simulation that propagated a multi-frequency spectrum of radiation from the galaxy and focused on the gaseous collapse of the nearby irradiated halo.  We found that close pair cannot be too close otherwise the BH formation site is totally evaporated, and it cannot be too far as the radiation would be too weak to prevent cooling and star formation.

In Park et al. (arXiv), we extend the Bondi-Hoyle model of gas accretion onto a point source to include an extended, co-centered mass distribution. In previous work, it had been argued that radiative feedback suppresses BH growth. However if this BH is embedded in a stellar bulge, this additional gravitational potential can drive gas toward the BH, fueling the growth of these stellar-mass BHs.