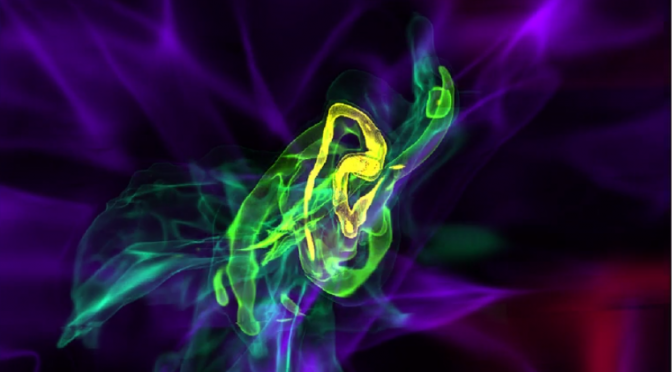 We have submitted a new paper to The Astrophysical Journal on the formation of massive black holes (BHs). See this link for movies.

The first massive BHs form in pre-galactic clouds that could be the seeds of supermassive BHs observed when the Universe was only 1 billion years old. These massive BHs could be 10,000 times larger than a typical BH that forms after a massive star dies. They form as a warm, gaseous pre-galactic cloud collapses under its own gravity. However, this cloud needs to remain warm (6000-10000 K), otherwise it will fragment into a star cluster. One way to keep the gas warm is to suppress all molecular and metal line cooling through a strong UV radiation background. Previous studies have shown that massive BH seed formation occurs when the UV background exceeds some critical value, but they have assumed a homogenous background with a prescription of local self-shielding.

In this study, we used ray tracing to simulate an anisotropic source of radiation that dissociates any molecular hydrogen. This method takes into account any absorption of radiation between the radiation point source, like a nearby galaxy, and the pre-galactic gas cloud. Then we can self-consistently track the formation and destruction of molecular hydrogen as the gas cloud (and its dark matter halo) grows. We find that the critical UV background intensity is unchanged, but the very core (~0.1 pc) of the pre-galactic cloud starts to cool by molecular hydrogen because it is self-shielded, even at extremely (almost unphysical) high intensities. This cool core will change the dynamics of the inner system but is still consistent with the quasistar or supermassive star scenario in forming a massive BH.